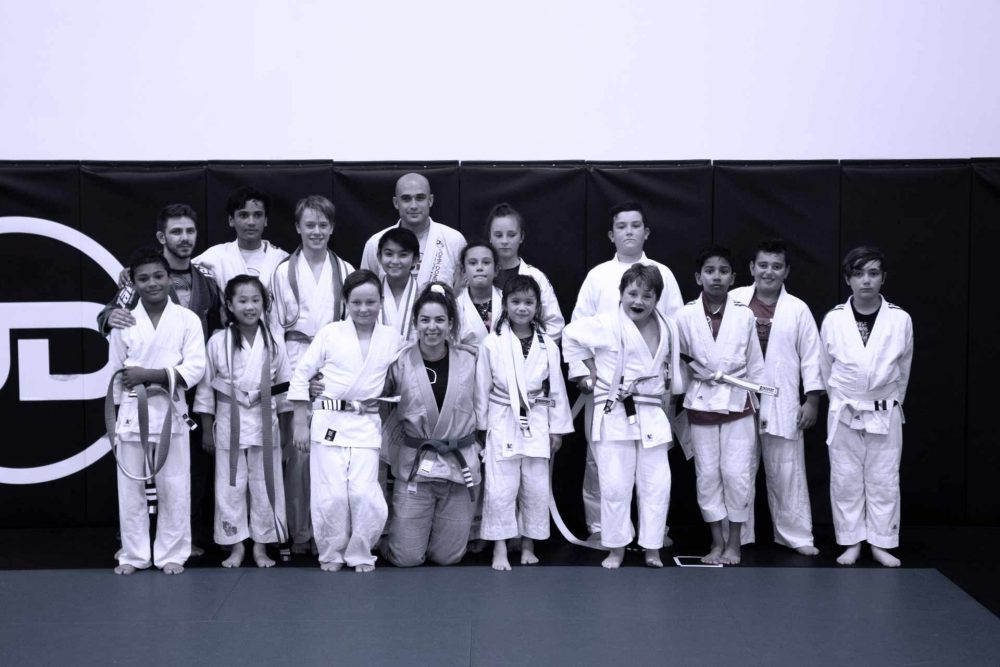 Five Reasons Why Your Child Should Learn Brazilian Jiu Jitsu

Five Reasons Why Your Child Should Learn Brazilian Jiu Jitsu

Simply put, Brazilian Jiu Jitsu (BJJ) is fun. Put a bunch of kids on a padded floor and they will inevitably begin to play fight, wrestle, roll and run.

Kids love to learn how to playfight. So when you show them a technique to help them to do it better, they are all over it. The next time they are wrestling with their friends on the mat, they can now escape being pinned!

Unlike other sports, with BJJ you get the fun of competition each lesson, and often more than once. (How? Because you’re not pretending, you are practising safely)

Simply put, BJJ works. Because it is trained against a resisting opponent, students will quickly understand what techniques are effective and what are not. Therefore, if they ever have to use their skills in a self-defence situation, they will have engrained movements that they have successfully completed many times.

They will also develop a tool box of responses. Depending on the situation, a BJJ practitioner has a range of responses available at their disposal. From sweeps and escapes, to takedowns, locks, holds and chokes. Striking arts really only have one option – to strike. So, if the practitioner wants a less violent solution they are out of options. With BJJ, you can progressively escalate the level of force and control used on your opponent.

The confidence gained from practicing BJJ cannot be understated. Each lesson involves play fighting against people of all sizes. The benefit of this is that we have experienced conflict, thus we are somewhat inoculated to its effects.

From a kid’s perspective, if they find themselves being tackled or held down in the school yard, they won’t freeze or freak out because they have been in those positions many times before. They know what to do to escape.

(At the same time they are taught to be humble, respect others, not become a bully, only use the skills learned in class and in extreme self-defence situations).

It is quite important for kids to have diverse friendship groups and BJJ facilitates this perfectly. After a few sessions, students are catching up outside of class and are forging relationships that go well beyond the dojo floor.

When a child begins BJJ, they will be introduced to the etiquette, rules and rituals of the gym. It could be lining up silently before class, shaking hands and bowing or just ensuring that they are not wearing shoes on the mats.

Whilst each gym is different, some being more strict or formal then others, the mere act of adhering to these behaviours will help the student to develop respect towards the instructor and the art itself. In addition, the instructors can use their position to weave in discussions of respect and other desirable morals as part of the teaching curriculum. What happens in a kids BJJ class?

What happens in a kid’s BJJ class?

Whilst there are rituals and routines in place, classes are kept fun and engaging. Although the specifics of instruction and content will vary depending on the age and skill set of the students, a kids BJJ lesson will be typically look like the following:

At the beginning of each lesson, students are lined up and addressed by their coach. They are introduced to the topic of the lesson and following a quick hand shake, then they will begin their warm up.

Starting slowly, this section builds with intensity to get them ready for the content of the class. Typical warm up activities include running, rolls, hip escapes and movement drills. Specific movements will be included that mimic the topic of the lesson, this is designed to prime the students for the movements that will be required later on.

In this section, a specific technique is introduced and explained. Students will then pair up and attempt to complete this technique with their training partners. The Coach will survey the room answering any questions that arise as well as continuing to guide the student through the movements required.

Under the supervision of the Coach, students will begin to ‘roll’. This involves putting into practice the skills and techniques that they have learnt, against each other. Students are reminded to look after the safety of their training partners as well as themselves.

Each lesson will end with a fun game that promotes an aspect required for BJJ. Students favourites include ‘Poison ball’, ‘knee tiggy’ and ‘revenge’. Member of the month: Yohan D’lima

MEMBER OF THE MONTH: YOHAN D’LIMA

HOW LONG HAVE YOU BEEN TRAINING BRAZILIAN JIU JITSU AT JOHN DONEHUE JIU JITSU & MMA?

I have been training Brazilian Jiu Jitsu for just over a year, I started in 2017.

WHAT DO YOU ENJOY MOST IN YOUR CLASSES AT JOHN DONEHUE JIU JITSU & MMA?

The positive and encouraging vibe from the coaches and my training partners make classes very enjoyable. END_OF_DOCUMENT_TOKEN_TO_BE_REPLACED